The mysterious rail tracks in Confluence 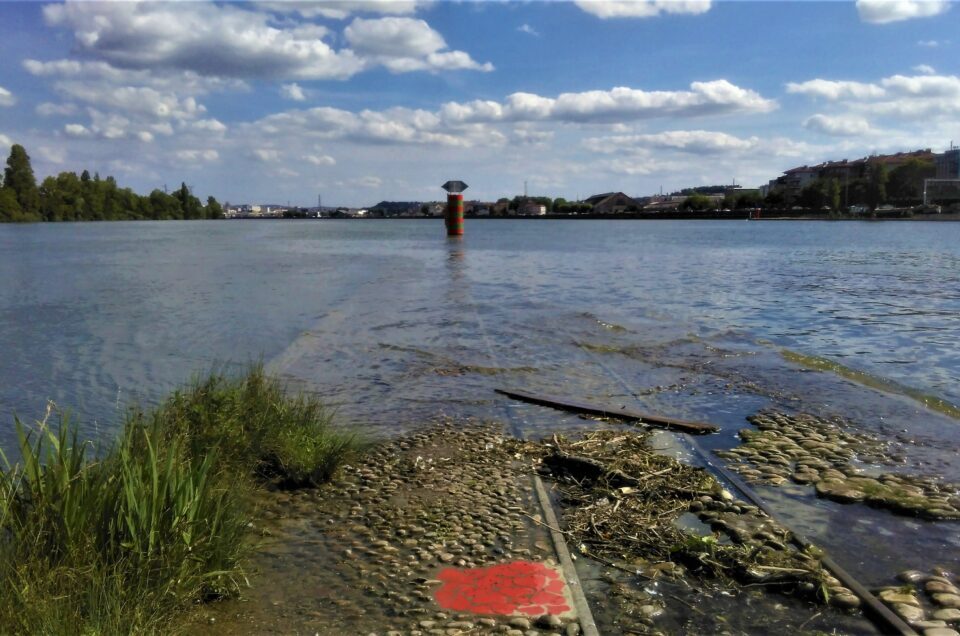 The Confluence district has many surprises in store for us. Last week, we were telling you all about the industrial past of this area (History of Confluence district). Today, we are going to talk about the mystery of the rail tracks at the end of the Peninsula, that go directly inside de rivers. But what is it? Here is the story…

The end of the Peninsula

You may have already walked in this area with your friends or family. If you haven’t done it yet, come and discover it with us thanks to our 2h Segway tour! Behind the famous Confluence Museum, you can go by walking to the end of the peninsula and see the confluence of the rivers at your feet. But what are these rails that go into the water?

This district and especially the Rambaud harbor (now, you can see contemporary buildings) were a landmark for inland navigation.  There was a lot of traffic so a lock and a dam were built, just before the confluence between the rivers, to facilitate traffic and regulate water.

Before the dam was built, navigation on the Saône could be complicated because of the rocks in the depths of the river. When the water was low, some boats could not access this area. A solution had to be found to raise the level of the area to facilitate the transit of bigger boats.

The construction of the Mulatière lock and dam began in 1876 and was completed six years later, in 1882. Thanks to the Caluire and Cuire lock-dam, the water level was one meter lower. A workshop was created south of the Peninsula to store the maintenance equipment for the dam. The link between the workshop and the Mulatière lock-dam was made by small wagons.

In 1966, a new dam was built in the south of Lyon, in Pierre Bénite, which made the use of this one obsolete. As a result, the Mulatière dam was destroyed which raised the water level and submerged the train tracks. Today, the workshop no longer exists and much of the rails are only a memory. Some parts of these train racks are still visible today. The red and green concrete pillars indicate to the boats that there is an obstacle in that area.

Now you know about the mysterious rail tracks of Confluence. If you enjoyed this post and want to discover easily this part of Lyon, learn more about our 2 hours Segway tour of Confluence :